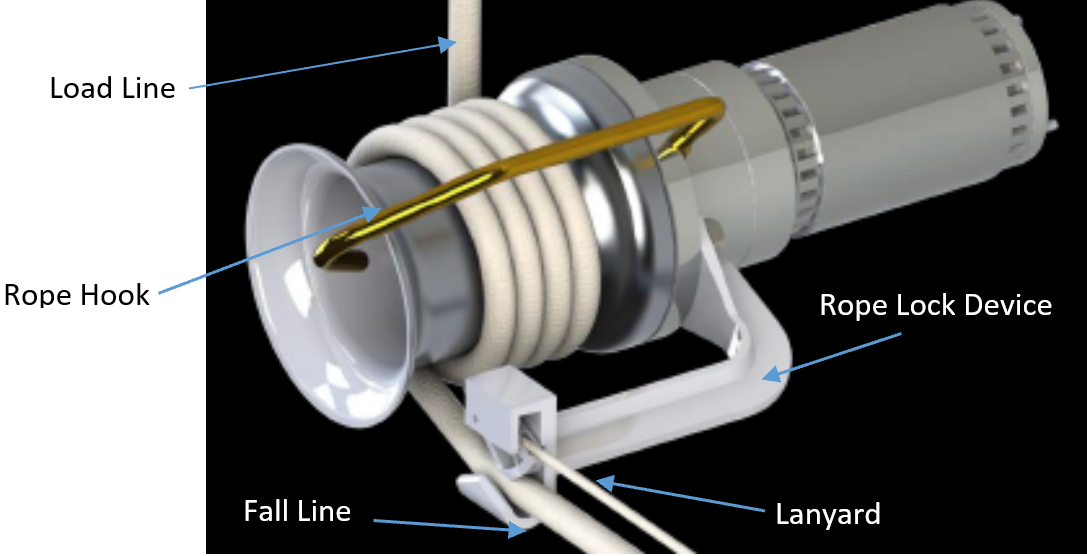 It has been 20 years since a devastating loss of a husband, step-son and employee were killed when a capstan hoist operated by the wife when ropes overturned on the drum as the men were being lifted on the load line, causing a  catastrophic failure of human lives. (https://www.cdc.gov/niosh/face/in-house/full200007.html)  This story and many near misses happen frequently and some, unfortunately end tragically.  To help the wireless industry TIRAP wrote a PAN about Capstan Hoists in January of 2016 https://www.tirap.org/pan/capstan-hoists-safety/ and the importance of safety while operating the equipment. The ANSI 10.48 was released in 2016 for the telecom worker to develop Rigging, Pre-Job Planning, Job Site Conditions, Fall Protection, RF/EME, Base Mounted Hoists, Gin Poles, Climbing Facilities, Structural Construction Loading, Training, Capstan Hoist, Demolition, Helicopter Lifting Loads, and much more.

Most hoists used in the industry are a Hubble Series 90 capstan winch:

Rigging has endless stories of near misses, trucks being dragged, damage to the tower, and capstans being ripped off the mount due to extreme forces.

Here are a few safe work practices to consider:

A) Weather Conditions and Wind Speed Regardless of all prior planning if weather conditions on the day of the job are inclement, e.g. wind, rain or fog reducing visibility then work should not go ahead. Series 90 capstans should only be used where average wind speeds at 10m (in open terrain) are no greater than 15mph with maximum gust speeds at the same level not exceeding 30mph. For lifting purposes, the wind speed indicated by the anemometer mounted on the boom head should be used as that is what is happening at height. Where is the wind force measured? the wind speed that is actually blowing on the suspended load can be a lot different to the wind speed at ground level; note that wind speed increases logarithmically with height according to a curve.

B) Anchor Points Due to their lightweight and portable nature, the safe operation of Series 90 capstan winches is heavily reliant on attachment to a suitable anchor point. When lifting/lowering equipment on a tower, a tower leg can be used. When lifting/lowering equipment on a mast, it may not be possible to anchor to the structure due to the tapering nature at the bottom; this should be accounted for at planning stage. Series 90 capstan winches can be anchored to vehicles but only when used in conjunction with a purpose made bracket supplied by the winch supplier or manufactured by a competent. The crew must understand the vehicle can take the loads imposed and gates and fence posts should not be used as anchor points.

C) There are limitations on the speed that the rope can travel around the Series 90 capstan winch drum. If the job involves several lifts/lowers a rough calculation should be undertaken based on the height of the lift/lower and an average travel speed of the rope (see manufacturer’s instructions). This should enable the team to ensure there is sufficient time allocated for the job to be completed.

F) Assure no one is never directly beneath the suspended load during the lifting/lowering operation.

G) A load should never be raised by taking so many wraps around the capstan, the operator is required to pull rope off the capstan as it turns. This could result in the rope overwrapping, causing loss of control of the load and injury and do not lift personnel.

To keep our men and women safe from near misses or damage to expensive equipment and to keep safe rigging for the entire team it takes education, training, and understanding the forces of the intended purpose of the equipment.